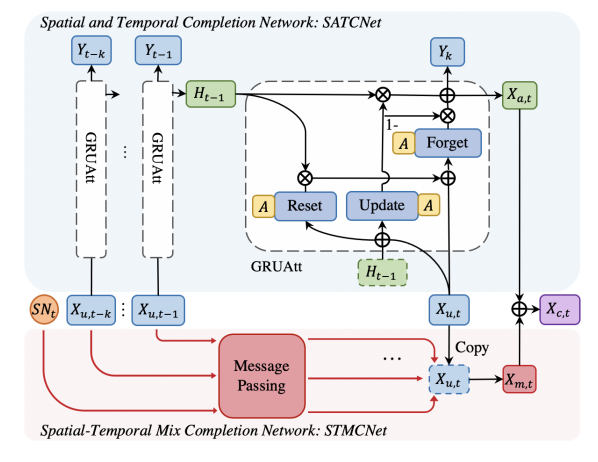 Urban flow imputation, which aims to infer the missing flows of some locations based on the available flows of surrounding areas, is critically important to various smart city related applications such as urban planning and public safety. Although many methods are proposed to impute time series data, they may not be feasible to be directly applied on urban flow data due to the following reasons. First, urban flows have the complex spatial and temporal correlations which are much harder to be captured compared with time series data. Second, the urban flow data can be random missing (i.e., missing randomly in terms of times and locations) or block missing (i.e., missing for all locations in a particular time slot). Thus it is difficult for existing methods to work well on both scenarios. In this paper, we for the first time study the urban flow imputation problem and propose a generative-free Attention-based Spatial-Temporal Combine and Mix Completion Network model (AST-CMCN for short) to effectively address it. Specifically, AST-CMCN consists of a Spatial and Temporal Completion Network (SATCNet for short) and a Spatial-Temporal Mix Completion Network (STMCNet for short). SATCNet is composed of stacked GRUAtt modules to capture the geographical and temporal correlations of the urban flows, separately. STMCNet is designed to capture the complex spatial-temporal associations jointly between historical urban flows and current data. A Message Passing module is also proposed to capture new spatial-temporal patterns that never appear in the historical data. Extensive experiments on two large real-world datasets validate the effectiveness and efficiency of our method compared with the state-of-the-art baselines.